Go wheeling and rock crawling in a customized Jeep Wrangler on the Rubicon Trail in the trip of a lifetime!

Crawl The Trail That Spawned The Sport!

ExtremeTerrain is excited to announce that entries are now being accepted for the Extreme Jeep Adventure: Rubicon Excursion giveaway! The Extreme Jeep Adventure: Rubicon Excursion is the trip of a lifetime on the Rubicon Trail. The trip includes 3 days of wheeling on the trail in a customized Jeep Wrangler, 2 nights of guided camping, and a guided excursion with a rock crawling expert. From now through March 31st, 2015, you can enter to win this amazing trip which also includes your travel and lodging. All you have to do is fill out the Entry Form before the contest ends. There is no purchase necessary and you do not need to own a Jeep to enter this contest! The initial reopening was made possible by the February approval of a recreation fee structure from the U.S. Forest Service Southern Region Recreation Resource Advisory Committee and cooperation between the USFS and Friends of Rattlesnake Bay. Volunteers from the OHV group helped USFS crews complete the needed repairs to the trails in late August.

“The OHV community is embracing the expanded platform of the Outdoor Access Initiative and we encourage all recreationists who rely on OHVs to access the outdoors to keep an eye out for projects that promote and protect that access,” said Mike Martinez, Yamaha’s ATV/SxS group Vice President.  “We recognize that by broadening the scope of the GRANT program, we increase competition for the funds available but, as a result, we expect to see projects that have a greater benefit to all OHV enthusiasts.”

Funding and equipment were awarded by the Yamaha Outdoor Access Initiative to the following organizations:

The Yamaha Outdoor Access Initiative has a new website (www.yamahaoutdooraccess.com) with a new look and increased functionality.  Visitors can choose to submit an application with the required attachments directly to the online platform, rather than emailing into the program.  As always, the site features the GRANT cycle calendar, and riding clubs, outdoor enthusiast associations, land managers and conservationists can also find the current Outdoor Access Initiative GRANT guidelines for submission.  Yamaha continues to seek qualified projects and applications at local, state and federal levels. The next deadline to submit a GRANT application is Tuesday, September 30, 2014.

About the Yamaha Outdoor Access Initiative:
The Yamaha Outdoor Access Initiative is the industry leader in Guaranteeing Responsible Access to our Nation’s Trails (GRANTs). Through this program, Yamaha has directly and indirectly supported thousands of miles of trails, maintained and rehabilitated countless riding areas, improved staging areas, built bridges over fish-bearing streams and partnered with local riding communities across the country to improve the OHV experience. Each quarter, Yamaha accepts applications from non-profit or tax-exempt organizations including OHV riding clubs and associations, national, state and local public land use agencies, outdoor enthusiast associations and land conservation groups with an interest in protecting, improving, expanding and/or maintaining access for safe, responsible and sustainable use by motorized off-road vehicles.  A committee then reviews each application and awards GRANTs to deserving projects. Examples of appropriate projects for GRANTs include, but are not limited to: 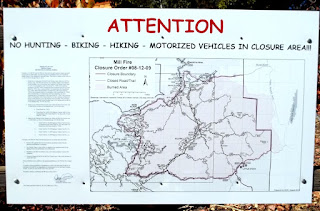 Is This the Future of OHV at Stonyford for the Next 2-3 Years?
As some of you already know, the Mendocino NF issued a public notice on Nov. 20 for comment on the Mill Fire Salvage and Hazard Tree Removal Project. Public comments are due by Dec. 17.
Mill Fire Salvage Scoping Letter (with contact info)
http://www.sharetrails.org/uploads/ScopingLetter_MillFireSalvageHazardTreeRmvl.pdf
Mill Fire Salvage Project Info
http://www.sharetrails.org/uploads/PreliminaryProjectInformation_MillFireSalvageHazardTreeRmvl.pdf
Mill Fire Salvage Project Map
http://www.sharetrails.org/uploads/ScopingMap_MillFireSalvageHazardTreeRmvl.pdf
While HQ historically supports responsible timber/salvage sales, this plan hardly mentions OHV recreation. In addition, the proposal functionally closes the area until late spring/early summer 2014 for both casual riding and permitted OHV events. I also think this proposal seriously undermines the agency’s credibility with the OHV community and other stakeholders.
It appears many important connector roads and trails will be closed during logging/treatment. Again, this could mean no enduros in 2013 and possibly 2014. The proposal gives no estimate on when the trails could be re-opened for casual use. Again, OHV recreation is hardly mentioned. There is no mention of what this functional closure would have on the largest FS destination OHV area north of the Grapevine. There is no mitigation for repairing the trail system. At 20K/mile (or more), it could cost hundreds of thousands of dollars to fix obliterated trails.
Also, there is no mention of the sale’s impact on the current and ongoing post-fire trail restoration efforts.
The proposal does not address what HQ feels is a critical matter and that is dealing with the knobcone pine infestation (and the beetles/bugs that are eating them) on Sullivan Ridge and the Potato Hill area. How would this closure of the area impact the potential for grants during the closure time?
All of the affected trails listed below would be most likely converted from a system trail to a road and closed during the logging operation. At a minimum, a project like this would have to have project level NEPA to analyze the conversion of 50 inch or wider system trails to roads.
Initial List of Impacted (e.g. closed/obliterated routes by salvage sale)
Trails 03, 11, 13, 14, 15, 20, 22, 33, 35, and 36.
4WD/OHV route/roads – 17N02, 17N14, 17N62B, 17N62C, 17N95, and 17N97
Be assured that HQ and BRC will be sharing our concerns with the FS, users, and conservation groups about what appears to be an ill-advised plan. This proposal as currently crafted is nothing more than an appeal and/or litigation magnate. I expect the FS will get hit from both sides of the land-use spectrum unless this plan is withdrawn or rewritten.
This proposal does not make any cents! (Yes, I mean cents as in wasted taxpayer and green sticker monies)
# # #
Original link
Original author: Don Amador